I have been exhibiting my work since 1992 at which time I combined primary school teaching alongside making ceramics. Additional training was a one year Supplementary Course in art and craft at Brighton Polytechnic, in 1978/9.

I became a professional member of the Craft Potters Association in 1998 (CPA) and in recent years I have sold my work in the Contemporary Ceramic Centre, London (CCC)

For many years I have taken part in the Brighton Festival open houses as a member of the Fiveways Artists Group and have exhibited in local galleries and group exhibitions. In 2006 and 2007 I exhibited in the Brighton Craft Fair and in 2oo7 and 2008 exhibited at Hatfield House, Art in Clay, event.

My inspiration is the natural landscape and patterns in stones and rock surfaces. I make a variety of forms including bowl, vessel and bottle forms. Mainly work is thrown, sometimes altered by squeezing or beating, or thrown work is combined with handbuilding.

I use St Thomas white clay, ST white clay and crank body clay. Glazes are white feldspathic, dry white glaze and black glaze, fired to 1235/40 C in an electric kiln. I am interested in surface texture and use silicon carbide in slip, with oxides to achieve an organic surface.

I am currently using stronger colour stains to offset the bands of silicon carbide slip. Subtle details like thickness of glaze adds to the chemistry and helps to produce differences in surface texture. 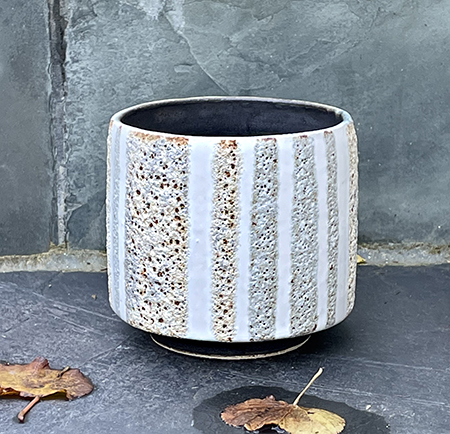